In an area of mangrove swamps and fertile farmland, Miss Juliette Becker built the first home in 1947 on the SE corner of Sample Road and NE 21st Avenue. Four years later, in 1951, the first acreage was acquired for development by R. E Batemen. In 1951 the first home in a new subdivision called Hillsboro Isles was completed. On December 23, 1953, the first baby, Cynthia Ann Wright, was born to "Lighthouse Point" parents. From these beginnings, the future City of Lighthouse Point began to emerge.

A civic association was formed in October 1953. By early 1954 residents of the new community met to decide whether to remain status quo, to be annexed by the City of Pompano Beach, or to incorporate as a separate entity. Our farsighted first settlers chose to incorporate. 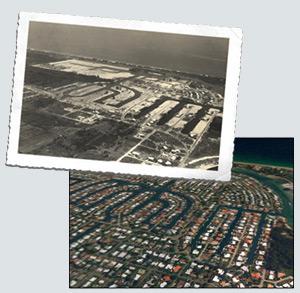 On June 13, 1956, the Town of Lighthouse Point came into being when 107 of about 600 people living here voted to incorporate. City Hall operated from a storefront at 1811 NE 24th Street. Fire protection was provided by Pompano Beach Highlands volunteers. Court was held on Saturday mornings when necessary. Town meetings were held every second week. In June 1957, Lighthouse Point received its state charter and officially became a City. A City Hall building was completed at 22nd Avenue and 38th Street in 1959 and by 1963, the City was able to employ a fire chief and ten reserve firefighters. In 1965 a police building was constructed across from City Hall to accommodate both police and fire departments. The two shared space until a new fire station was built later on.

The subdivisions of Venetian Isles, Lighthouse Manor, and Wooler Heights were added between 1957 and 1969. In 1970, after approval from Tallahassee and referendum of the people, the Coral Key and Pompano Waterway Estates areas officially became part of Lighthouse Point, increasing its land area to 2.36 square miles and population to nearly 9,500.

Officials then focused on supplying services to an expanded population and continuing to qualify as a full-service community. These efforts gave rise to several beautiful parks and mini-parks, including Dan Witt Park, Nature Park (renamed DeGroff Park in 1982) and Lake Placid Park (renamed Frank McDonough Park in 1983). 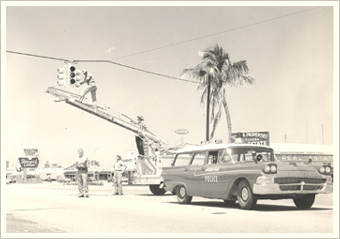 A professional paid fire department started on October 1, 1972. Also in 1972 a modest City library department was created, a full-time librarian hired and a Library Advisory Board appointed. The facility was located in the Venetian Isles Shopping Center. In 1973 a Public Works maintenance building was built at the north end of Dan Witt Park. Cable TV came to us also in 1973. In 1974 the fire station was constructed just south of the Police Building.

During the decade of the 80’s the library’s Venetian Isles location was expanded by 50%, hundreds of shade trees were planted throughout the City in conjunction with the Beautification Committee’s "Green Team" project, Federal Highway was widened, Exchange Club Park was opened as a joint venture with Pompano Beach, a Code Enforcement Board was established, the old Public Works building across from City Hall was converted to a recreation center and design work began for the new City Hall and Library facility which was eventually constructed and dedicated on March 15, 1987. In 1989 the city acquired the 80-foot parcel of land on Cap’s Island, now known as "Al Fletcher Park," which is used for pram sailing and police boat dockage. 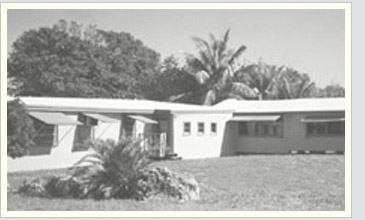 In 1990 Cap’s Place was officially listed in the Florida National Register of Historic Places and in 1991 the City designated it as a historic structure. In 1996 the city celebrated its 40th birthday with a City-wide party at which many of its pioneers and benefactors were honored.

No decade of city history has been without its controversies; probably none ever will be. As we enter this new millennium, however, we have the benefit of knowing the direction the residents of Lighthouse Point wish to have their City take in the years ahead. A strategic planning session was held on October 3, 1998. Armed with information gleaned from those who attended this all-day vision session, elected officials will be better prepared to move into the 21st century - better equipped to preserve what is best about the past and to make the decisions that will ensure a prosperous and proud future.

The above is a summary of a more complete City history which is available to interested parties at the City Clerk’s Office. The City history includes articles and photos dating back to 1948. If you are doing a project or are just a history buff, please feel welcome to come in and use it for reference.